Part of compiling my new demo reel has involved construction of a series of short process-oriented vignettes that will later fill out the new video.

The first video is a culmination of the series of posts I've made over the last couple of weeks.

It details the end-to-end process from video capture through animation and the final composited sequence.
Posted by Unknown at 4:51 PM No comments:

second, 3 bouncing balls, emphasizing the difference in physical properties between each.
Posted by Unknown at 10:31 AM No comments:

Unfortunately, I can't embed the video directly, but here's a link to the final animation.
Posted by Unknown at 8:19 AM No comments: 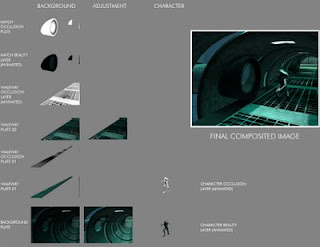 All of the images were initially rendered in Maya.
The animation was produced as a rotoscoping/match-moving project that began with video capture of myself moving as the character.
Posted by Unknown at 8:15 AM No comments: