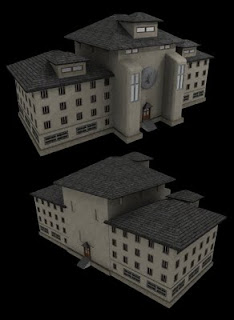 This render has nearly all of the normal maps included in this pass and I've gone back and adjusted the texture on the window bars.
To enhance depth and sell the reality of the windows I've baked in the ambient occlusion contribution and added a customized reflectivity shader to the texture.
If you observe the windows in shadow, you'll notice that the texture does not get uniformly darker, but behaves a little more like a partially-reflective surface.
Posted by Unknown at 3:25 PM